If you follow NCN 7/14/70 through Durham from west to east, then after crossing Pennyferry bridge and proceeding south towards Fleshergate you find a no entry sign which adds "Cyclists dismount". There ought to be a contraflow cycle lane on this one way street. Round the corner just further on there is a contraflow lane!

Update, 3rd May 2016.
The road layout has been changed in conjunction with the new office blocks at Freeman's Reach. The road was previously wide enough to be two-way, apart from the problem of the bays for coaches to offload tourists. Now the pavement has been extended to enclose the bays, and the main carriageway is much narrower. What had been ordinary footway further along is now a ramp up to the office doors, with the footway now taking the place of part of the previous carriageway. There is a shared-use sign on the pavement, if you are travelling north, but "cyclists give way to pedestrians" has been added, as though they are aware that the space is not really wide enough. On the reverse of the sign is a "cyclists dismount" sign again, so there is still no means of turning south round the corner to join the short contraflow lane.

By the end of Pennyferry Bridge there is now a little shared use sign indicating that it is permissible to cycle on the new walkway round the river side of the office blocks. Mixing bikes and pedestrians along this route will probably be unpopular. 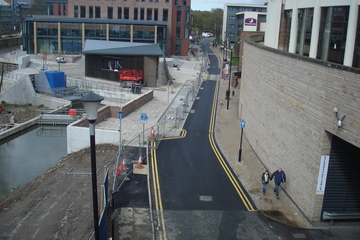